We all know them: programmers with long term experience stuck on a low-level of our craft not corresponding to their quantity of experience. Great programmers are creative workers and problem-solvers and one of their most important traits is: never stop learning – but getting stuck in its own comfort zone and becoming reluctant to change is deeply wired into human nature (Humans are hard-wired to follow the path of least resistance). In the following, I will show examples of non-productive programmers (NPPs), how to detect them, what are their characteristics and how to pro-actively counterattack our nature in order to learn continuously.

Stuck in the Comfort Zone#

Never leaving their own comfort zone or never thinking outside the box is one major reason why programmers get stuck. They rely on deprecated rituals, fall prey to old habits which they cannot strip off or adhere to technologies to which they are often heavily attached. Sometimes NPPs identify themselves with a special technology. This is visible when they introduce themselves as Spring or ReactJS developer.

A good example are Java/Websphere NPPs. They have ten years of experience and don’t know any other programming language or server technology. With Websphere, 10+ minutes builds and server startup times are normal. Since these programmers never experienced anything else, they are satisfied with their current environment. They adjusted their whole workflow around long waiting times, e.g. go for a “compile coffee break” or simply “check emails”. In rare cases NPPs have the courage to make some babysteps out of their universe. For instance they switch from Websphere to the “lightweight” Spring Framework which reduces the wait times enormously – e.g. from ten to three minutes. But the real big leaps in productivity are not considered, speaking of new programming languages like Go and NodeJS which provide build times in the range of seconds. The previous example serves a demonstrative purpose, please don’t rewrite your project because of faster build times!

The quantity of experience is only one dimension. More important is the quality and deepness of experience. Especially NPPs suffer from superficial knowledge because in their work life, they never went deep into details. They apply their accumulated knowledge again and again without gaining a deeper understanding in their used technologies or problem domains.

The quality of experience can vary strongly. NPPs often end up in a vicious cycle. They move from project to project and the acquired knowledge of the first year is enough for accomplishing the next one. Due to the similarity of other projects, NPPs are never exposed to harder problems or forced to go out of their comfort zone. E.g. Java NPPs will never learn deeper foundational topics which are necessary to grow like the internals of the JVM, Profiling or Concurrency.

A presumable Java NPP’s vicious cycle could look like this: 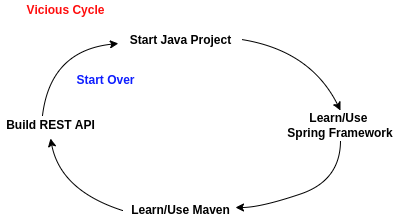 Kelsey Hightower brought it to the point:

There are many people with 15 years of 1 year experience.

“It works, is enough” Attitude#

One of my personal programming pet peeves is the It works, so why change? attitude. Typical crime scenes are daily Pull Requests or Software Design Reviews. NPPs are reluctant to do the simplest changes like variable/function renamings or other code restructurings.

Leaving the camp ground cleaner than before.

The famous boy scout rule also applies to code, but cross-functional requirements like maintainability, comprehensibility or better code quality in general do not count for NPPs. It works, so why put more effort in it - that’s their attitude. This behaviour is even encouraged by so-called agile teams, not experienced in software engineering. Such teams work heavily feature-driven. Developers pushing out the most features, in a bad quality and with unmaintainable hacks or workarounds, are the company heros. The internal quality suffers, in the long term the product architecture becomes a Big Ball of Mud, the velocity slows down and eventually progress comes to a complete halt. Thereby internal quality is the most critical factor to keep a product healthy and maintainable. Worse yet, even with good developers in the team, NPPs will undermine their efforts because the it works mentality wins for the management.

In the contrast to NPPs, great developers write maintainable code readable by humans, test their code rigorously with unit tests, refactor their code regularly and most importantly they are willing to go the extra mile in Pull Requests or Design Reviews and strive for a healthy codebase.

The NPP’s biggest weakness though, is his deeply rooted behavioral pattern to be easily satisfied. As soon something is working, there is no aspiration anymore to investigate further. The result is shallow understanding. NPPs don’t understand their tools and their own solutions fully – they accept magic.

The acceptance of magic inhibits NPPs from getting to the bottom of the problems. For example the Spring Framework is a powerful Java Web Framework and a big productivity booster. As long you don’t step out of the framework’s scope, everything is fine. But if you want to do something unconventional, not anticipated by Spring, out of sudden the framework is an impediment. Since the NPP accepted Spring Framework’s magic, he is screwed. The NPP’s shallow understanding is exposed, but:

Eventually, there is no “magic”, just code.

Sometimes, the only way is digging into the framework’s or library’s code. Ultimately one discovers there is no magic or that the library’s code is ugly, hard to read and understand or even faulty. Then you learn something new and expand your horizon. Unfortunately, NPPs don’t read Open Source code, it is not in their comfort zone.

One more example of a NPP’s shallow understanding is his missing deeper knowledge about his daily tools, e.g. git. More often than not, NPPs usually use IDEs for their daily tasks because it’s convenient. Although, it turns out that NPPs only can accomplish basic tasks like git push/pull/commit, anything more mature such as resolving merge conflicts, squashing or re-order commits is beyond their understanding because they never went out of their cozy IDE zone. Using tools without knowing what’s behind them, leads to an ability which helps to accomplish regular tasks but as soon something “unexpected” needs to be done, one hits a wall.

The natural desire to understand the things deeper is one of the most underestimated traits of an outstanding engineer.

Another kind of NPP is eager to read blogs and books in order to learn new technologies, platforms and processes, e.g. GoF Design Patterns, TDD, DDD, SOLID Principles, DRY etc.. Alas, NPPs don’t grok them entirely, follow them blindly and eventually doing more harm than good. They only see the top of the iceberg, memorize only buzzwords and don’t comprehend in which situation to apply the lately acquired knowledge. Unexpectedly, they overuse mantras and bask themselves in self-congratulation.

In my career, I experienced following examples personally from different co-workers:

NPPs memorize the benefits of the new technologies and are able to enumerate their values but they don’t understand their cost. Trade-offs are neglected and freshly learned approaches are applied in wrong places where they don’t make sense. Often solutions are mixed up and situations are misjudged. A famous quote describes this perfectly:

Programmers know the value of everything and the cost of nothing.

Convincing NPPs of the opposite is hard and often ends up in harsh disputes , because NPPs think what they read in a seminal book is “always” true. Actually this is a good differentiation between good and non-productive developers. NPPs follow mantras blindly and rely on their shallow understanding. The best developers know when to use specific techniques and always use their own judgement. Kent Beck’s quote “It depends” is not famous for nothing. Every complex situation deserves a deeper reasoning whereby programming is one of humanity’s most complex endeavors.

Becoming productive is easy. Do exactly the opposite of the points mention above:

Changing your attitude and applying the above points make you a better programmer. But how to become interested in the deeper things or how to train programmers to look behind the curtain? Well, everyone is different but from my experience following things work:

Finally, real proficiency and productivity comes from working and training everyday. There is no shortcut, humans’ best teacher is learning from experiences and failures. Failures will stick, whereby the passive knowledge like books and talks will slowly fade away if not practiced regularly.