Most of the breakthrough inventions in historic and modern Software Engineering are related to feedback loops. They are essential for productive software development, Developer Effectiveness and Developer Happiness. Remember the dawn of computing when computers were programmed with punch cards, programmers had to turn in their cards over night and the next day they got the result – often with a compile error 😞. Unlike back then, today’s computers compile whole codebases in seconds. That is an insane productivity booster caused by faster feedback!

Feedback Loops not only have a massive impact on software development but also on digital product management and on whole team structures. Speaking of the agile and lean startup movements, both of them focus heavily on shorting feedback loops.

Feedback is strongly interwoven with a programmer’s everyday life and his productivity. On a typical workday a developer has dozen of contact points with feedback loops which are incorporated into his work. The most obvious one is the write - compile loop. Every programmer is familiar with it and the compiler is one of the most used and valuable programming tool. In the last decades the write-compile feedback times were reduced tremendously. Clever IDEs even compile the code during typing which provides instant feedback.

There are many other feedback loops, programmers come in touch with. For example, the purpose of Code Reviews is to gain feedback from colleagues to prevent errors from entering the mainline. Furthermore, a code review is a place to share thoughts, give feedback about good or bad design and act as a learning platform where seniors and juniors can interact with one another. Reviews are not bound to executable code alone, but can be conducted for specifications or design docs too. The earlier errors are caught, the cheaper is the cost to repair.

Building software is more than programming and technology alone but also includes product management, teamwork and work processes. Feedback loops are also crucial for these aspects. The whole agile movement is mainly a collection of principles about speeding up feedback cycles. E.g. getting feedback from the customer as early as possible, deploying and releasing often, delivering working software frequently , business people and developers working tightly together. Another critical agile principle is reducing waste which is accomplished by releasing often and getting customer feedback. Namely, the biggest waste in software product development is building a product nobody wants.

Customer feedback is so important that a whole new methodology, the lean startup, has evolved around it. Its center is the build-measure-learn loop which helps shortening the development cycles, briskly discovering viable products and reducing uncertainty. With the build-measure-learn loop, companies are enabled to understand early if a product will be valuable, viable, usable, and feasible. Based on such data, organizations can make much better decisions regarding future roadmaps and plans. The lean startup methodology heavily promotes building a Minimal Viable Product (MVP) and releasing it to customers, so feedback can be collected even before the final product is built with high costs. With continuous customer feedback, it is possible to make course correction early on, so the product direction can be changed and adopted to the market needs. 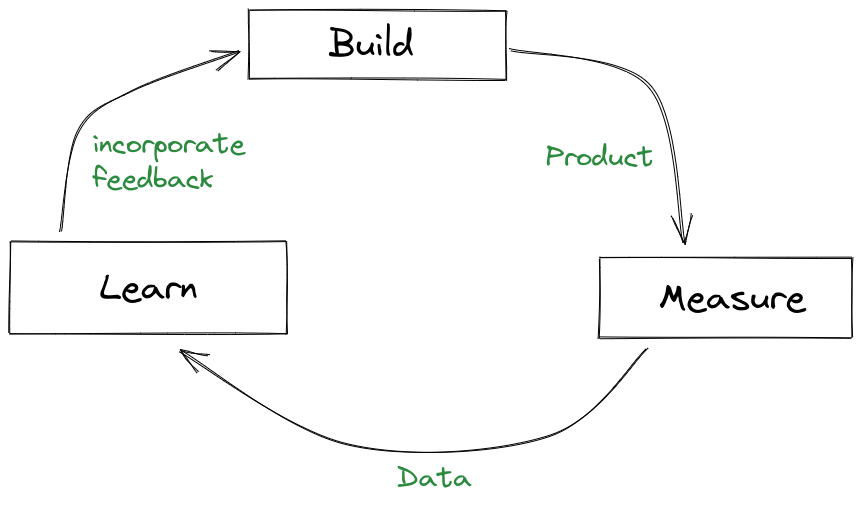 Customer thoughts are indispensable since they have the best insights. A good example of ignoring customers is Microsoft Windows 8 and its newly introduced tiles UI/UX. It was a complete disaster which could have been prevented. The result, most of the users stayed with Windows 7 and Windows 8 was a big flop.

Agile frameworks like SCRUM, Kanban, SAFe etc. draw on shortening feedback loops too. SCRUM, for instance, uses Sprints and Sprint Reviews to ensures regular delivery of working software at a consistent pace. Stakeholders or real customers can see the progress of a product and assess its state in a much more tangible way than with lifeless wireframes or dry PowerPoint slides. Normally such product presentations happen on a weekly basis in contrast to traditional software development processes like the Waterfall Model in which working software was delivered only after months or even years.

Key-Performance-Indicators (KPIs) are another piece which play a vital role in agile product development. They provide all kind of clues which should lead to better decision making, e.g. which product features are used in general, how often they are used and are they used as indented. With such data, companies can determine if a feature is successful, which feature needs more tinkering or which feature can be removed from the product. Feature validation is essential and a good indicator if a company takes customer feedback seriously. The best companies take a few weeks to validate a feature, in contrast to traditional companies that are never able to validate a feature because of an absent feedback channel.

Feedback loops do not only play a dominant role for IT teams but are also used to regulate complex (IT) systems. Two kinds of regulating feedback loops exist:

Positive feedback loops enhance or amplify changes; this tends to move a system away from its equilibrium state and make it more unstable.

Negative feedback loops tend to dampen or buffer changes; this tends to hold a system to some equilibrium state making it more stable.

Negative feedback loops keep systems in a desired state, e.g. a thermostat measures the temperature in a room and reacts based on the measuring. It turns the heating up or down. The Kubernetes Control loop is a prominent implementation of a negative feedback loop in the IT field. For example, a Kubernetes controller observes the number of running replicas and starts or stops them when the current number of replicas deviate from the desired number.

Positive feedback loops, however, lead often to wrong conclusions and actions. They come often in disguise and are hard to identify, a practical example from The Software Architect Elevator: A government detects there are too many cars on the roads causing permanent traffic jams. As a reaction, the government decides to build more roads indicating to people to buy more cars which will cause even more traffic jams.

I hope, I could provide you a good intuition where feedback loops are used and that they are fundamental for many leaps in modern software engineering.

The faster the feedback, the more productive you are as an individual, as a team, as a department and as a whole company! If you want to improve, it’s always beneficial to look for possibilities to shorten feedback loops.